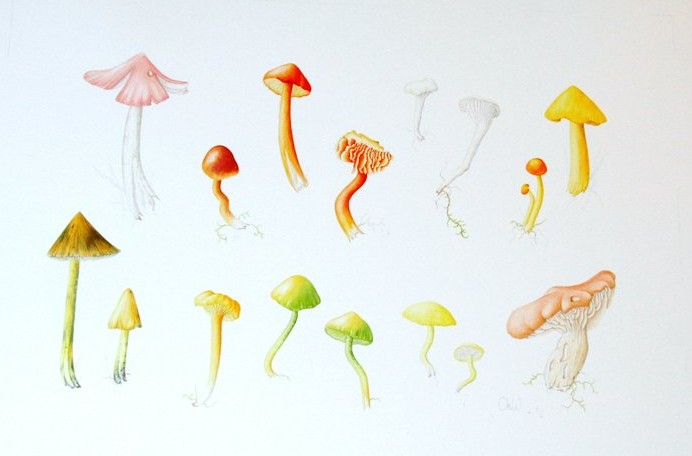 Colourful Hygrocybes, the jewels of autumn meadows.These are commonly called the waxcaps, a grassland species in the UK. Some are getting rarer due to loss of meadows and intensive farming practises ,like over-use of fertiliser.﻿
Still they can be found in garden lawns, commons or graveyards. If the ground is undisturbed, you may find the rarer species like the pink (H. calptriformis- like a dancing ballerina) or the crimson waxcap (H.punicea),these are the top 2 in the left hand corner of the painting. There is even a green one called the parrot waxcap, a white one called the snowy waxcap and one that turns black, the blackening waxcap (bottom left).
I recently went back to the site where I found the rare pink waxcaps and found that it has had houses built on it which was sad for me.
This is a rework of earlier paintings and sketches and will be the last fungi one I do for a while.
and so for now have a Merry Christmas everyone
-Nadolig llawen -
Posted by Claire at 09:56 4 comments:

I now have dates for an autumn exhibition next year, from the 26th October for one week or so.
It is being held in the beautiful Elan valley center in Powys,which is very nature orientated and so will suit my work really well. It is called 'Oaks and Orchids' and will represent the nature of the Elan valley and habitats of west Wales. I have plenty of time for working in the valley next summer to paint the orchids and other beauts I can find (hopefully). It's exciting as it's my first solo exhibition. 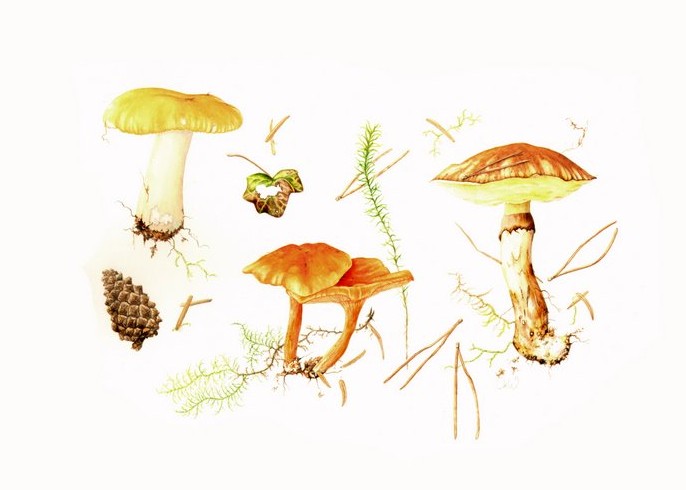 Meanwhile I'm still painting mushrooms! These common ones I've found growing in conifer woodland near my home. They are from the left; Common yellow Russula - Russula ochreleuca, False Chaterelle -  Hygrophoropsis aurantiaca, and a slippery Jack - Suillus luteus,with 3 types of moss, a Scots pine cone and needles.
Posted by Claire at 10:42 6 comments: