Just finished painting the butterfly orchids at the top - its difficult to paint white flowers on a white background but using gentle shades of grey to mould the shape works ok. It was a bit of a struggle though and I thought I'd ruined it at one point (headache).
The orchid flowers underneath are the marsh helleborine; one of the most beautiful british orchids.They have bright magenta stripes and a frilly whitish lower lip that moves back and forwards on a hinge. 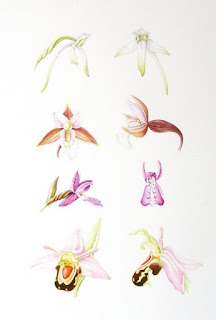 Work is very hectic at the moment and I've not managed to get out anywhere unfortunately but I worked up another drawing in pen from a Hafod sketch of Dologau bridge.
I love the ivy trailing down over the rough stones. 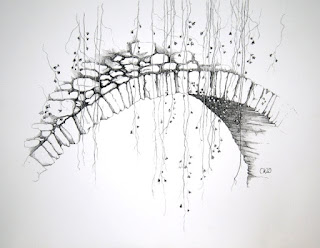 Anyway, I hope the weather gets better- Its looks like another dreadful British summer!!!
Posted by Claire at 05:08 4 comments:

Back to the Hafod

I visited the Hafod estate today with my sketchbook,as the weather was good. But when I entered the woodland past the Hafod church I got a shock, as the forestry commision has been thinning out the conifer trees. It wasn't the cool,mossy woodland that I knew but quite a scene of destruction;logs and dead branches strewn around covering the green mossy hillside. However light now floods in to the forest and it won't be too long before nature takes over again and saplings will grow in the opened up woods. 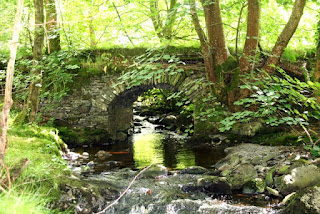 Down by the river though was peaceful with untouched older woodlands and I sat by the old bridge.
I love the lime green light filtering through the trees and the velvety moss on the banks.
Its a scene I've painted before in spring-time with pastels; I find it hard to capture the light and shade and my style is very detailed - It's difficult for me to loosen up when painting landscapes,I guess its not in my nature to paint that way.


Walk the open forest paths through the sweet scent of Valerian and Filipendula,then into the dark wooded interior,with mushroomy smells of earth and moss. 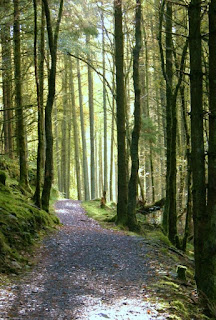 Heres a path I've sketched before in pencil and pastel. One day I'll do a finished picture of it. 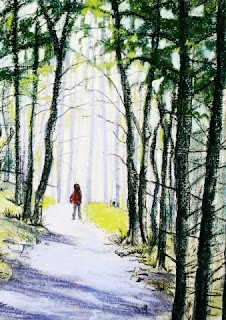 It is great to see the old beech trees still standing strong. 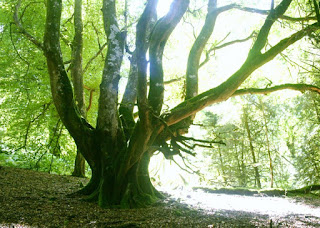 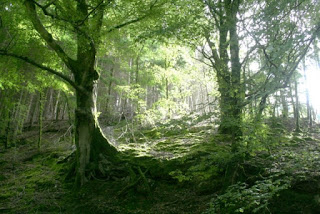 Later I sat in Mariamnes garden in the sun thinking of the history of the estate. Mariamne was Thomas Johnes sickly daughter who, in 1811, died at the young age of 27. She suffered from an unknown chronic illness but was a bright student with a keen interest in botany. Here her old garden has been opened up and some seats put in. None of the old plants or trees remain from that era but a Ginkgo biloba tree has been planted. 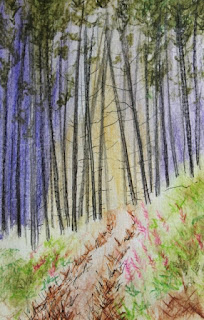 Heres my sketch from the Hafod; light through the conifer stands and magenta rosebay willowherb. 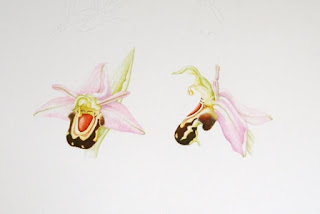 I've finished the bee orchids now.You can really see the 'ducks head' now which holds the pollinia sacs,full of tiny pollen grains.
The delicate pink petals were painted with weak washes of permanent rose and quinacridone magenta (Winsor and Newtons) but to get that real fresh, bright pink I had to use some opera rose-Its the only fugitive paint that I (rarely) use but theres no other colour quite like it to capture those pink hues in some flowers.
As long as the painting stays out of direct or bright sunlight it'll be fine; also they can be framed using UV glass for protection against fading. Most paintings stay in a portfolio folder though not seeing the light of day!
Bye for now..
Posted by Claire at 07:48 5 comments: