Last week in between showers,I drove down to a Plantlife reserve called Cae Blaen Dyffryn,near Lampeter. Its only 9 acres in size on a slope in the midst of farmland,but has been classified as an SSSI due to the rarity of this type of habitat;once widespread in Wales it has dwindled due to agricultural developments. 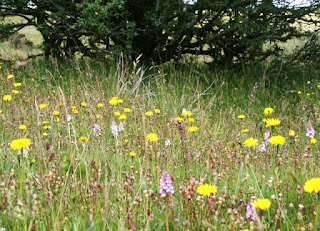 Its certainly full of wild flowers and life;butterflies were flying all over and the sound of grasshoppers was amazing.There was plenty of cats ear,yellow rattle,common spotted orchids,knapweed and other common meadow plants but also the rarer greater and lesser butterfly orchids.

I sat and drew some single orchid flowers before the showers started again! 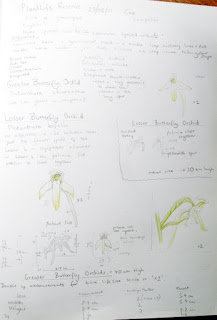 At home I enlarged the drawings by 2 using a ruler and just doubling the measurements-(Felt like I was back at school-in maths,my worst lesson!). All orchid flowers are so fascinating but small!

A few years ago I drew a butterfly orchid for a painting, from a photograph taken from the same reserve.Here it is cropped down: 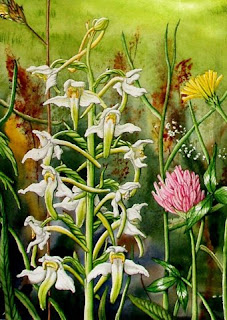 The orchid was masked off with masking fluid first then the background painted wet into wet,the orchid flowers are then left as the white paper; its one of the best ways to show off white flowers.
Now I'm back to work and thanks for following x