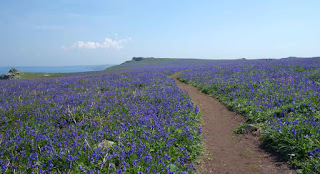 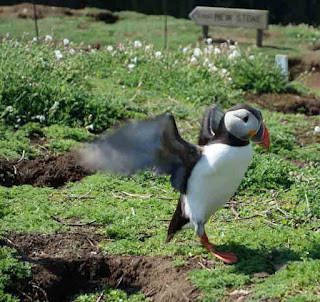 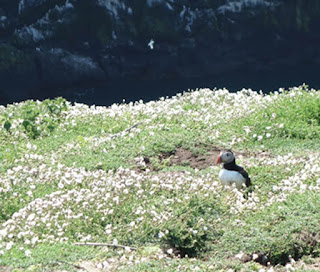 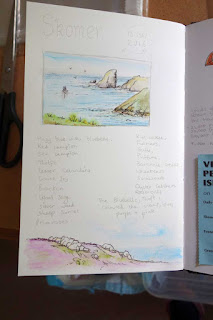 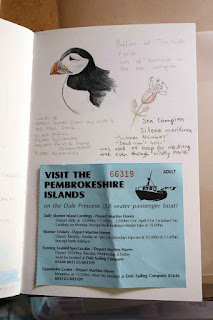 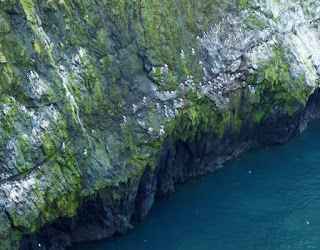 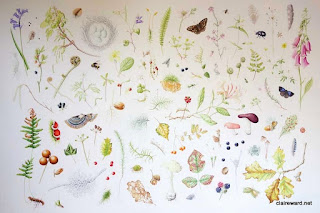 The Plants and pollinators exhibition in Blossoms gallery, Aberystwyth is on now for 4 weeks. There are some really fascinating sculptures of enlarged pollen grains and deconstructed flowers which all makes for a different and interesting show.
Here are a few photos from the exhibition. 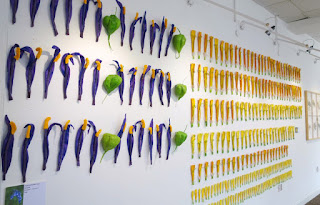 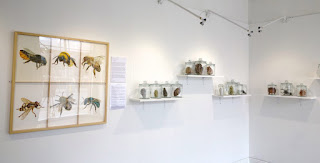 These amazing insects and sculptures are painted and made by Tereska Shepherd, the gallery owner. 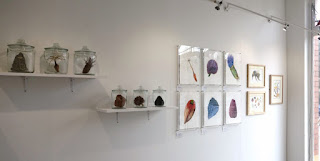 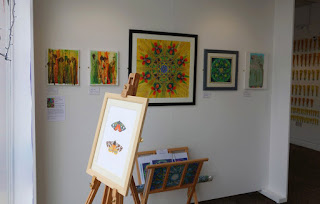 My moth painting is on an easel in the window. 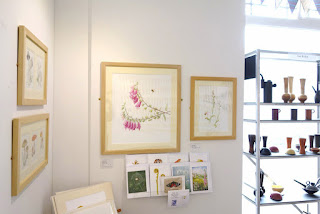 Here are 2 more of my paintings, the foxgloves and bee and the bee orchid. 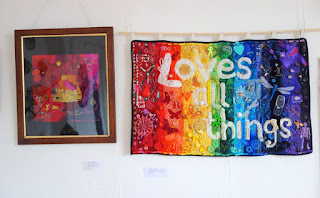 Upstairs in the Eco gallery is the exhibition 'Made with Love and Rubbish' with amazing work by Sue Clow and Ruby Roberts. All pieces are hand crafted from recycled rubbish, very thought provoking and colourful too.
If you'd like to check out Blossoms gallery, here's their website.
Posted by Claire at 10:49 3 comments:

Now the new year is in full swing and health wise I am feeling much better, it's time to catch up. It has been very hard lately trying to keep inspired, when feeling terrible. The weather has also been bad, constant rain, so not good to go out with a sketchbook. Such a shame we've had no snow, just rain. But I still have work from the October journal at Cymystwyth Arch so I will post some now.

The Arch- Y Bwa was built by Thomas Johnes of the Hafod Estate in 1810.
I love this place so much, it has an aura about it and a good place to sketch. But unfortunately on my last visit I was sad to see that a lot of trees had been felled and the place looked a bit like a bombsite. Two huge conifers that were growing near to the arch were felled; this upset me most of all as they hosted a great diversity of fungi in autumn. I understand that a lot of larches have to be felled as the Phytophthora ramorum disease takes hold in this area but these trees were not larches, (I think Spruces), but I'm sure (hope) there's good reason for it. Anyway, it will all grow back in time into native heath and woodland.
Larch woodlands are beautiful and a favourite of mine. These delicate trees allow light to penetrate under the canopy and so other plants flourish beneath them, unlike some other conifers plantations, which create dense dark woods.They are deciduous, so in Autumn they scatter russet needles and leave a carpet of glowing colour. Very sad to see so many being felled due to the disease in this area. 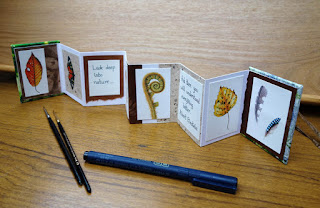 I've made a few more mini concertina books and have them for sale on my Etsy shop, a link is in the right hand column.

I hope to start painting soon, it's been a few weeks with no painting so I think I've had enough of a break, well OK, artist block!

Going out in nature with a sketchbook or journal  is such a brilliant pastime. I cannot recommend it enough. The act of spending time, observing your subject rather than just taking a quick photograph and moving on, is extremely rewarding. Feeling the spirit of the place, the wind and sun (but not much of this lately here in Wales), hearing the birdsong; it all evokes emotions and hopefully you pass this on into your sketch. 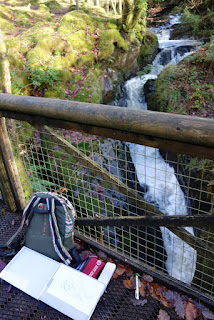 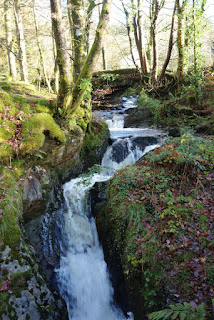 Bridge and waterfall at the Hafod Estate.

You can see my rucksack here which has everything I need (almost) from graphite sticks, watercolour pencils and pans with a water-brush, gouache and ink pens, aswell as various types of paper and books. 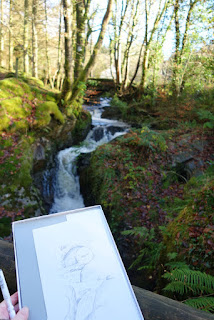 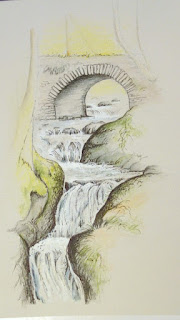 This scene was drawn using graphite, pencils, pen and white gouache on a slightly tinted paper to make the white water stand out more. 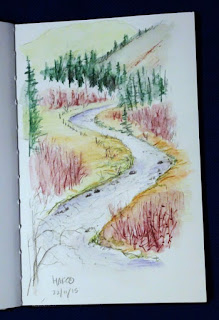 This is a view of the snaking river Ystwyth on the Ladies walk at the Hafod Estate,
just roughly drawn in colour pencils. 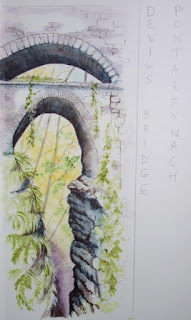 This I did back in October, of Devils Bridge - Pontarfynach. The left one was painted in watercolour and pen in situ but I later redid this one at home as I felt I'd overdone the pen!! But maybe the second one is too pale. I think I need more practise on my watercolour stonework! 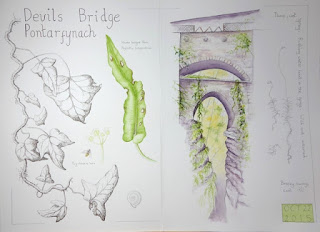 As well as making a journal, I've made two little concertina books and added prints of my paintings,
a leaf one and a fungi one.

Other news is that I have 5 paintings hanging in Oriel Flodau - Blossoms Gallery,  in Aberystwyth. I am very pleased with how they look. The new gallery is a great place, run by lovely people with lots of amazingly talented artists and diverse crafts for sale. If you're in the area have a look in. 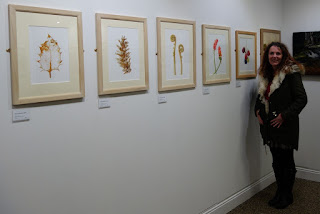 Just a quick update on the blog for a catch up.
At the National Botanic garden of Wales there will be another fungi event day on Sunday the 11th of October. I will be there this year with a stand showing paintings and doing a watercolour demonstration. The day is full of fungi events like forays, food, lots of different types of art and woodcarving to name a few things. I visited the event last year and thoroughly enjoyed it. The weather was fantastic so I hope it will be this year too for the forays. 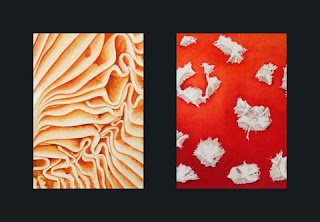 I've been working on all sorts of fungi (and lichen) art, like these mushroom mosaics, which are quite abstract. They are in watercolours but I have also done a couple on canvas using gouache and acrylic.
I've been out foraying and filling my mushroom journal to show at the festival aswell. 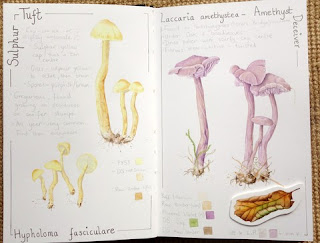 I also have a workshop at Denmark Farm on the 18th of October which will be inspired by fungi and autumn.
Happy foraying! 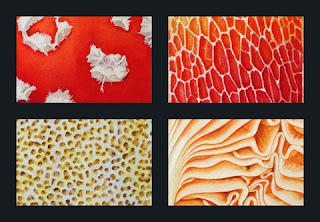 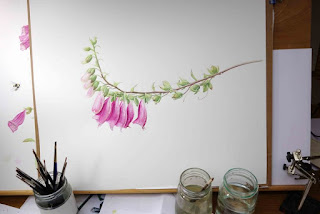 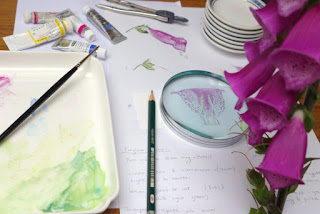 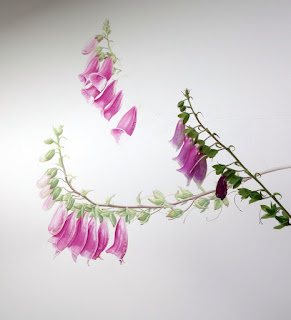 The meadows are now bursting into life as summer progresses and it's time to go out sketching.

One of the most interesting and essential plants within most wildflower meadows is a plant called
'Yellow Rattle',  Rhinanthus minor. Its generic name comes from the greek words for nose and flower, as the corolla is supposed to resemble.
The seed capsules rattle when they are dry hence the name yellow rattle. So walk through the meadow in late July and you will hear the rattling of the tiny seeds as they disperse.
These meadows flourish with this little annual because it is semi parasitic on grasses, so reduces their growth and keeps them in check, allowing more wild flowers to grow. So if you want to grow a wildflower meadow,sow some yellow rattle and with a little help, it will deal with the grass and let your flowers be the stars. 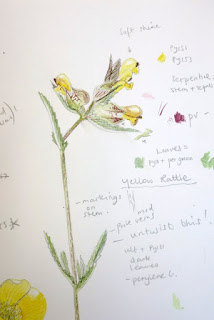 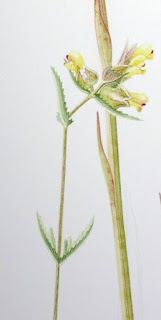 An interesting plant to study and draw, I've sketched yellow rattle plenty of times. The pictures above show from sketch to finished painting. The sepals and stems have beautiful coloured markings and textures, painted with perylene violet.

Herbalists uses to recommend yellow rattle boiled with beans and honey for coughs and poor eyesight. So the liquid was either drunk or dropped into the eye.
It has a few other common names too, hay-rattle, penny-grass ( from Elizabethan times), shackle-caps
and also yellow cockscombe.

If only there were more of these meadows.